Saturday, June 13th
Excitement and joy was in the air when the 38 participants met at Hlutverkasetur on Saturday morning.
Anna and Vala welcomed the guests and started the conference. All kinds of craft and artwork activities were offered. The Fimo clay is always popular, so is paper craft. Everybody got a textile bag for stamping and the bag was a nice item to collect autographs on as well. The solder pens were hot and the component bar was full of things to create something funny and different. Everyone painted their call sign on a small pebble from the seashore that was then collected into a box and nobody knew what would happen to it later.
Before lunch some Zumba dancing was taking place. Everybody enjoyed it, even the two YLs that had casts on their legs.
After the lunch the formal SYLRA meeting began. Vala was conducting the meeting and Anna was secretary. First Vala asked for a brief introduction from every participant. Ingrid told us about highlights from the board meeting the day before. Then we discussed a new website, the SYLRA calendar and also greetings from absent members. Marita agreed to manage publishing the calendar. Anna and Vala introduced the newly established TF-YL and two TF-members Soffía and Elín introduced themselves. Elín also talked about her local at Snæfellsnes, and the plan was to go there the next day.
Most of the OM enjoyed the good weather during the YL meeting, took a walk to the Harpa concert Hall, promenaded on the main street Laugavegur and looked around Reykjavik.
After a coffee and a delicious SYLRA cake we took off to Borgarnes in a bus. We stayed at Hotel Borgarnes but dined at the Settlement Centre. After dinner some looked around the small town while other rested after the joyous day. In the evening we were tempted to get a radio operational and it was quite a task followed by chat and laughter. The only contact however was when a grumpy hotel guest requested silence in order to sleep. Then it was time to go to one´s room giggling with joy.

Sunday, June 14th
After a hearty breakfast we left by bus at 8:30 towards the Snæfellsnes peninsula. We had one photo stop before entering Álftavatn where our local guide around the peninsula lives. Ragnhildur welcomed the group generously, offering some biscuits and schnapps and stories of the site. The weather was wonderful, although not quite as hot as at a sunny beach, blue sky and the Snæfellsnes glacier could be seen in its glory in the distance.
Around 11 we took off in the bus with Ragnhildur in the guide seat. The first stop was the seashore at Ytri-Tunga. There we had the golden sand, the ocean surf, birds and seals. You only had to turn around to see all the mountain of Snæfellsnes. At this place Anna and Vala opened the box with the call sign pebbles and arranged them in a circle in the sand. A circle to show our solidarity and camaraderie.

After refreshing sea air it was sweet to sit for a moment in the bus knowing that delicious lunch was waiting for us at Lýsuhóll. When arriving at Lýsuhóll those interested could check out the stables before settling into the dining hall where tasty soups were on the menu.
Fed and happy the travelers could choose what they wanted to do after lunch. Several decided to go for a swim in a unique pool at Lýsuhóll where mineral water is the main feature. Two decided to go for a ride and the rest enjoyed the good weather and a cup of coffee at the restaurant. Several members strolled around the neighborhood. The Finnish children enjoyed themselves in the pool while the adults sat in the hot tub between swimming turns.
We were happy returning from the swimming pool to the bus but then got the terrible news that Janina had fallen off a horse and broken arm. The hostess at Lýsuhóll drove Janina and her parents, Joana and Carsten, to the hospital in Akranes and from there to Reykjavik. It was then with three fewer in the group that we left from Lýsuhóll. In the evening we got news that the accident was serious, Janina needed an operation the next day. So it was impossible that they would come back to us to finish the trip.
On the way to town Stykkishólmur we stopped at the lake Selárvallarvatn where we had some water, biscuits and schnapps.
We arrived at the hotel in Stykkishólmur in the afternoon and there we had a free time until the gala dinner would be served at 19:30. There we met some amateur friends, Villi TF3DX and Gudrun TF3GD in their shack-mobile. They did put up an antenna and the amateurs had an opportunity to go on air and it is certain that it attracted a lot of joy.
A wonderful gala dinner was in the evening and everyone had a good time together to chat and rejoice.

Monday, June 15th
We did not start early this morning and it was already 10:00 when we left the hotel. One small sightseeing round in the village ended at the harbor as we intended to go to a boat trip on Breidafjördur, Viking style.
During the two hours sailing we saw various birds, rock formation, vigorous currents in the sea and more. The highlight was when the dredge was lowered into the sea and hauled with the freshest sushi material imaginable. Everyone got to taste scallops, sea urchin and other tidbits directly from the sea. Those interested could buy a glass but then a small bottle of white wine was included as a bonus.
When coming ashore we went directly to the restaurant Plássid where tasty soup and bread was ready for us. There was much discussion as four participants were to leave the group. The formal SYLRA meeting was adjourned and the four members were saluted.
From Stykkishólmur we went further out the Snæfellsnes peninsula with two brief stops. One was at Gufuskálar where an enormous mast that once was the tallest manmade object in Europe could be seen. This is the old Loran mast from the abandoned Loran station. Vala told briefly about the history of the site but due to the heavy rain we only took a look at it through the windows of the bus.
Near dinner time we were at Hellnar, on the west point of the peninsula, which was our place to spend the night. We met again Gudrún and Villi and they activated the mobile shack again to our excitement. The radio was on until after midnight but as fewer could operate than those who wanted Villi started the operation again early in the morning after for yet more YL to get QRV.
We had dinner together with the usual chat, enjoyment and exhilaration.

Tuesday, June 16th
We took off about 9:00. The weather was not the best, pouring rain and mist so we did not see a glimpse of the glacier. We realized how fortunate we were with the weather the first day when we had the clear view with the blue sky.
Big part of the group went to a trip into the cave Vatnahellir. Those who did not take that trip went in the meantime with the bus to the Malarrif lighthouse and some other places around. The cave explorers were very triumphant after finishing a journey 35 meters down into the ground.
The lunch was a picnic prepared by the hotel, which we enjoyed outside, taking cover by the bus. It was an Icelandic picnic, with lot of rain and wind. 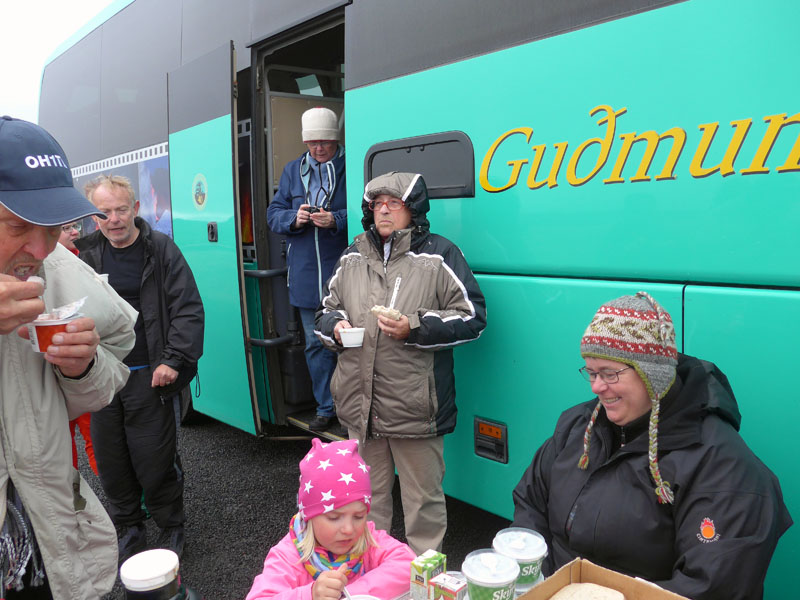 Then we visited some remarkable places on the south part of the peninsula; Arnarstapi, Búdir and other interesting spots. A part of the group walked from Arnarstapi along the seashore to the rock sculpture of the folkloric Bárdur Snæfellsás. An Exciting walk in the rain and lots of photos were taken despite the low visibility. All the hikers arrived wet but jolly.
Early dinner was at Langaholt, a nice little restaurant near the sea. A soup and delicious fish meal was eaten with good appetite. This was the last meal together and the chat was quieter than usual at the meals.
We took off to Reykjavik about 18:00 and we returned Ragnhildur to her home at Álftavatn. She got warm greetings and appreciation for all the sagas she had told us.
It is OK to say that there were tired but happy travelers that arrived at their hotels in Reykjavík and Keflavík in the evening. We all agreed that this had been a great trip. Travels to one´s homes were ahead after several days. The 'memory-fund' expanded handsomely these days.